You are here: Home > Roamer – Working with EAL/ESL children
By Maggie Morrissey on January 15, 2015 in IT & Computing, Projects, Teaching and Learning

I first introduced the robot to my English as a Second Language group (ESL) as I wanted to see not just how they reacted to using the robot but also how they handled using directional language. The group consists of approximately 12 children from year 3 up to year 5 with all of them either very new to English or maybe encountering difficulties with learning English. I wanted to engage their interest so wrapped up Roamer in many levels and we played ‘Pass the Parcel.”

They certainly enjoyed this and there were enthusiastic cries of what they thought it would be. In fact only one child was correct and she was adamant from the start that it was a robot. I haven’t had the chance to ask her is she has in fact used a Roamer in another school, something to do when I return to Moscow this week. 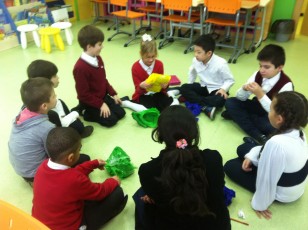 Once Roamer was revealed I showed them the symbols and explained how it would move forward. We kept it quite simple initially, with the children sending the robot to their friend so they only encountered the term forward and learnt how to judge the distance using the length of the roamer as a unit of measurement. The very quickly learnt how to estimate the distance and I was quite impressed.

In the second session the children had to work with a partner sending the roamer forwards and backwards, they had to write the instructions into a book only using the forward and back symbols. These were clearly marked up on the whiteboard and they didn’t encounter any problems. They then moved onto to turning the roamer left or right and had to make an L shape. Of course prior to working on turns we did this without the robot, working in small groups they would turn their partner and send them somewhere. As there were a variety of ages it was quite amusing to see who knew their left from their right. This may of course clashed with their first language of Russian but it was unclear if this was the case. 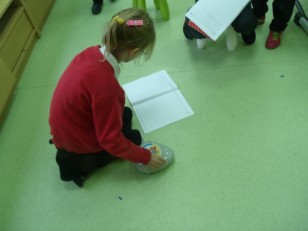 These young groups of children really enjoyed the activities and were more than keen to write up the instructions into their books. My older year five children showed the same enthusiasm. I will write later about their work as I need to return to Moscow so that I can closely look at the work that is in their books.